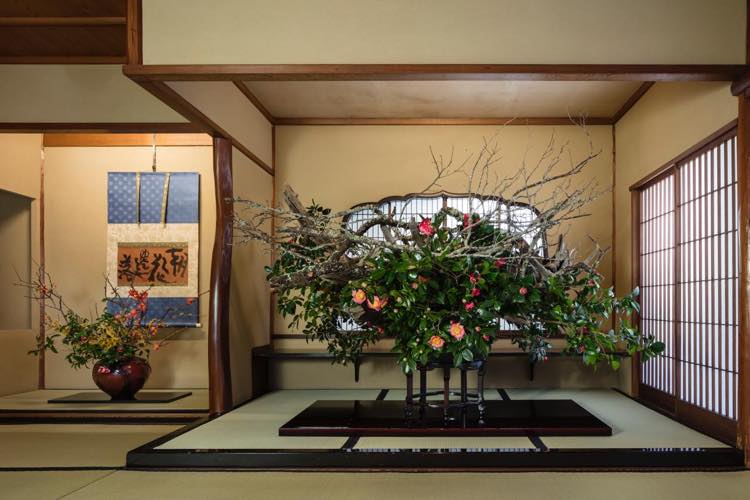 As a special event held in conjunction with the Museum Collection Exhibition "Paintings Created as Sets",the Iemoto created several works using camellia in the tea houses "Kōnintei" and "Bujian" in the garden. The Exhibition "Paintings Created as Sets" is inspired by Hyakuchin-zu or One Hundred Camellias (said to be painted by Kano Sanraku) displayed annually. The camellia is our founder Sofu’s favorite flower and with which Sogetsu School is closely associated. With four arrangements using camellias , Iemoto exhibited its dignified beauty and poise to the full. 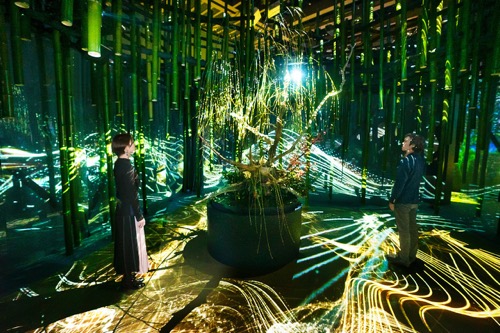 NAKED is a creative company which creates digital art spaces while skillfully utilizing projection mapping and music. Iemoto Akane has displayed her works at their annual art event "FLOWERS BY NAKED – Nihonbashi, Tokyo –" consecutively since 2016. It's the one and only collaboration constructed by ikebana and technology. 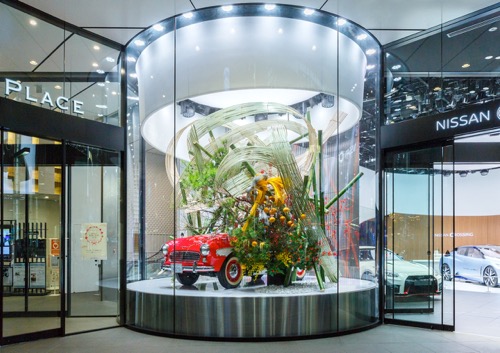 At GINZA PLACE located in the center of Ginza, one of the most prominent shopping districts in the world, the Sogetsu School collaborated with the tenants of the building to create this installation event for celebrating the New Year.
Iemoto Akane arranged flowers, in public, on a "Fairlady SPL213" displayed in a cylinder facing onto the Ginza 4-chome crossing. The gorgeous flower decorated car attracted great attention from the passers-by. 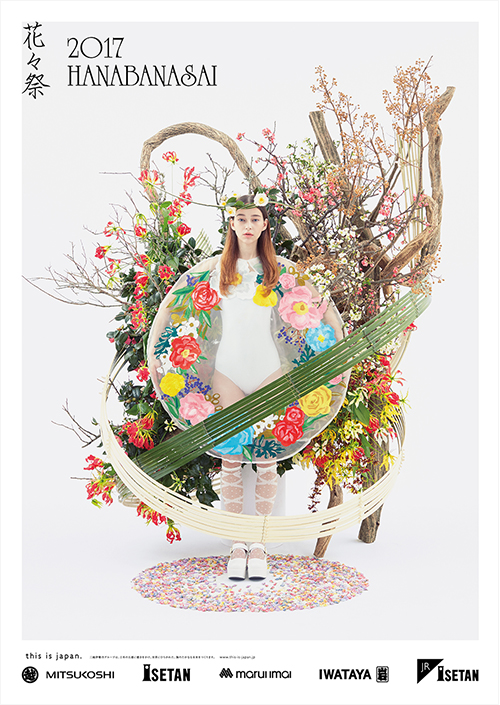 Iemoto Akane created this work for the image of the HANABANASAI 2017 campaign held at the department stores of the Mitsukoshi Isetan Group. Kiri Teshigahara, Sogetsu Art Project Director & Executive Director of Sogetsu North America, played the role of the coordinator at the Sogetsu School.
The Iemoto created this work while considering the model who was wearing a costume of flowers styled by fashion designer Yoshikazu Yamagata as one big flower. The concept was "Dressing becomes flowers, flowers become human." The work represents the awakening of the power of spring. 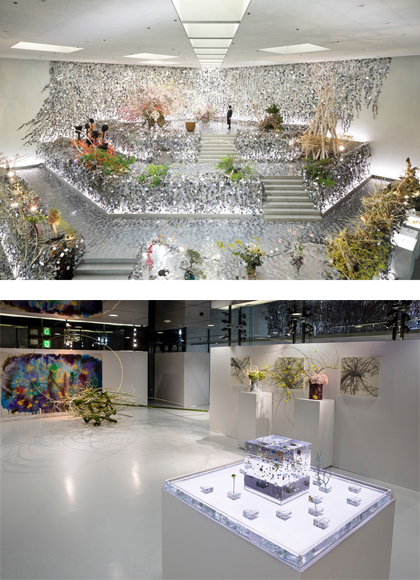 Iemoto Akane's solo exhibition "HANA SO" was held to commemorate the Sogetsu 90th Anniversary. Using the Sogetsu Kaikan as its stage, the Iemoto collaborated with various artists.
The design office nendo led by Oki Sato and the space design office onndo covered the indoor stone garden "Heaven" with numerous "mirror ivy" leaves made of stainless steel plates. This splendid venue design received many design awards. Together with the Iemoto's impressive works which were filled with vitality, the stone garden was transformed into a sparkling unique space and became the highlight of this exhibition.
In the special exhibition "Collaboration between Akane Teshigahara and Modern Art," interactions between artists belonging to the Tomio Koyama Gallery for contemporary art and ikebana creations of Iemoto Akane who is inspired by their art works attracted great attention. 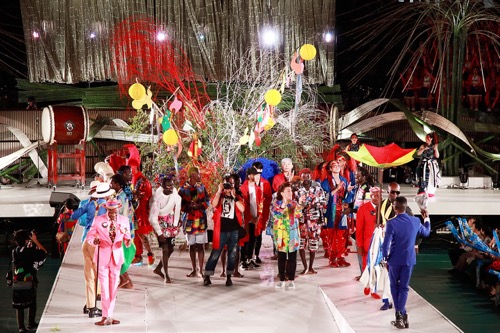 "Super Energy!!" was a show event produced by world-famous fashion designer Kansai Yamamoto. Raging human energy was expressed, together with over 500 cast who sympathized with his passion, "Let's energize Japan!"
Iemoto Akane decorated the bamboo stage and did an ikebana performance. Some Sogetsu members also showed up on the stage and greatly energized the venue. A completely new collaboration was realized, disregarding nationality, race, age, professional and armature, as well as cultural and traditional differences, and transcending complicated barriers such as industry, genre and brand. 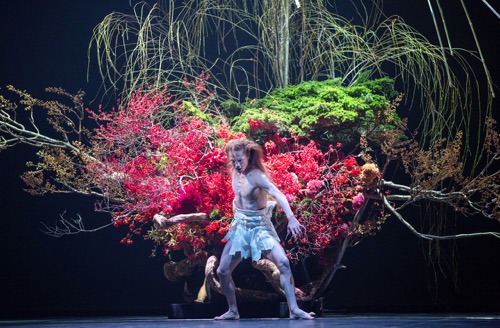 Iemoto Akane supervised the stage art of Act II, "Demon Flowers" in the "Breath of Sound" in which Japanese music was combined with dance. In front of the backdrop of her large work arranged with autumn fruiting branches and flowers, dancer Kaiji Moriyama danced to the flute sound of Japanese hayashi musician Tōsha Meishō. At the climax, Moriyama powerfully pulled out her large work to the center of the stage, thereby making a collaboration not just creating a decorative work for the stage.
Home ＞ Gallery ＞ Collaboration